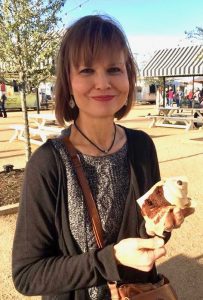 It doesn’t take horrific abuse to cause a piece of one’s soul to shatter.  Sometimes the wounding done to our heart by others is not intentional, but the impact is the same – a broken soul.   When I was six months old, my father abandoned my mother with no money and no way for her to take care of my brother and me.  My aunts got together and devised a plan to get her into college, so for the next three years, I went to live with an aunt and uncle while my brother lived with grandparents.  I was told by my aunt when I was older that when she took me to live with her, I was “spoiled” and had to be “broken” from crying.  My mother didn’t mean to harm me; she was just trying to survive from her own woundedness.  But as a six-month-old, the abandonment by my mother, the most important person in my world, caused a part of my soul to shatter.  Modern psychology calls these parts “coping mechanisms.”  The wounded part, or personality, that was formed believed that to not be abandoned, one must be very good.

The wounded personality thinks it is actually helping the core to cope with life.  But a demonic stronghold is set up in a wounded personality because of the lie that was believed.  And the enemy works to reinforce that lie, calling in other demons in his network to exert pressure and cause further wounding.  That happened when my mother left me again with an aunt when I was five to marry my stepfather.  I remember crying for hours in my bed, believing she was not coming back and that I would be abandoned again.  She did come back for me, but my stepfather was not a good husband or father.  He was emotionally abusive, and I was afraid of him. (Late in life he accepted Christ.)  Other parts splintered off as time went on and I was programmed to believe that performance, perfectionism, and people-pleasing were ways I could keep myself from ever being abandoned or rejected again.  This way of coping is also called “self-protection,” and anything we trust in to keep ourselves safe besides God is sin.

Even though I was saved at age 12 and began walking in earnest with the Lord at age 21, these were traits in me that could not be overcome by Bible study, prayer, or counseling.  Yes, I would get relief for a while, sometimes for a long period, but then something would threaten my security, and the wounded parts would take control.  Everything in one’s life is affected by a wounded soul—choice of mate, parenting styles, job decisions—not always negative choices, but choices made by wounded parts are motivated by demons rather than the Holy Spirit.

I grew as a Christian as I walked with the Lord, and this is probably the most perplexing aspect we have in looking at a personal need for freedom ministry.  Everything looked okay from the outside, and to a degree everything was okay.  My saved core was under the control of the Holy Spirit and was bearing fruit.  But with a split soul, there was a messy war going on which is best described by Paul in Romans 7.  I believe he may have been describing this condition when he said that although his inner man concurs with the Spirit and wants to do what is right, he finds a war waging in his members (his flesh), and he can’t do what he wants to do….except for Christ.

Jesus came to bind up the broken-hearted.  He didn’t say to go to church so many times a week, memorize ‘x’ number of Scriptures, pray so many times a day, and eventually you’ll get it right.  He came to heal the broken parts, to make one whole.  The clear sign with me that something was horribly wrong inside were the emotional meltdowns.  Oh, when I was younger, I could pass them off as hormones and PMS.  These things do affect women.  But like a pressure cooker, steam would bubble up from time to time because I could only cope so long without my soul crying out.  The little child in me, who was me, was still afraid of being abandoned.  But my emotions would stabilize, and things would calm back down for varying periods of time.

Literally years went by and the normal cycle of life continued….joy, sadness, pain, peace.  But in the year before I received complete healing, my emotional upheavals became more frequent and also frightening.  I felt as though I was losing control at those times.  My emotional reactions were well out of balance in response to whatever incidents had sparked them.  I believe the Lord was allowing them to intensify as I gained knowledge of this deeper ministry because He had appointed the time for me to be healed.  Until this time I had no knowledge of my true condition and the healing that was possible.  Now, He was allowing, so to speak, the lid to blow off the pressure cooker.

My life had certainly not been a mess.  I have always felt blessed among women because of my relationship with the Lord and the good gifts He has given me in my life.  No one would have looked at my walk and believed anything was amiss within my soul.  I could have continued on and would have grown in the Lord and probably continued to have a ministry with women.  You see, the Lord didn’t need to heal me in order for me to grow in Him; He chose to heal me.  God isn’t concerned with making us better versions of ourselves.  His goal is to make us like Christ.  We will be on this journey until we are in heaven, but He will heal us along the way as we seek Him.  He sees our wounded hearts and hears the cry of our souls, and He has provided the answer.